Amazon Is Entering Health and Fitness Tracking With a New Wearable

Today Amazon announced their first health and fitness tracking product, Halo. Halo is a new wearable band and membership that aims to help you improve your health and wellness.

Amazon’s Melissa Cha, a vice president at Halo, said in a press release that the company already had expertise around machine learning and computer vision, but expanding into health has taken several years of preparation.

“We did a global search to find the best experts,” she said. “We found cardiologists, fitness experts, and people who had spent their careers researching sleep and wellness.”

With Halo, you get a screen-free, wrist-worn tracker and the software to help you monitor your overall health. Amazon said that the lack of a screen was a design choice to limit distraction for the wearer. There are sensors including an accelerometer, a temperature sensor, and a heart rate monitor, along with two microphones. The Halo band, which comes in a variety of styles and sizes, is meant for 24/7 wear, so it’s waterproof, and the company’s estimates claim a week-long battery life.

Halo’s software will reward wearers’ activities according to duration and intensity level and will subtract points for sedentary time not spent sleeping. For sleeping, there is the ability to track your sleep with a score based on the quality of your rest.

Halo also has a body fat percentage measuring tool that Amazon claims is “as accurate as methods a doctor would use.” This feature is compared to getting a DEXA scan, which requires specialized equipment and is expensive, with just a few photos. Amazon is leaning on its A.I. knowhow to compute the estimates but has not given many details on the science behind the feature.

Halo also goes beyond traditional fitness tracking with another unique feature – Tone. This uses the built-in microphones to listen to the wearer’s voice throughout the day and use it to report on how they felt. With both features, Amazon claims that all recordings and photos are processed on the user’s phones, deleted after processing, and never uploaded to the cloud.

Additionally, Amazon has stressed its commitment to privacy with this new device and pledged that it won’t use the insights to sell health-related products to its users. 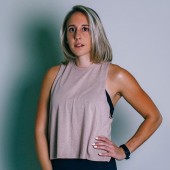 Kait Vadenais is a certified personal trainer and health enthusiast who likes to stay active with a calendar filled with workouts. She is always down to try the new boutique fitness studio or trendy workout, and loves connecting with similar people within the community. You can follow her fitness adventures around South Florida on Instagram @activekait.

6 cycling tips for beginners from My City Bikes Miami